For Kristen Kish, Cooking Is About Finding What Feels Right 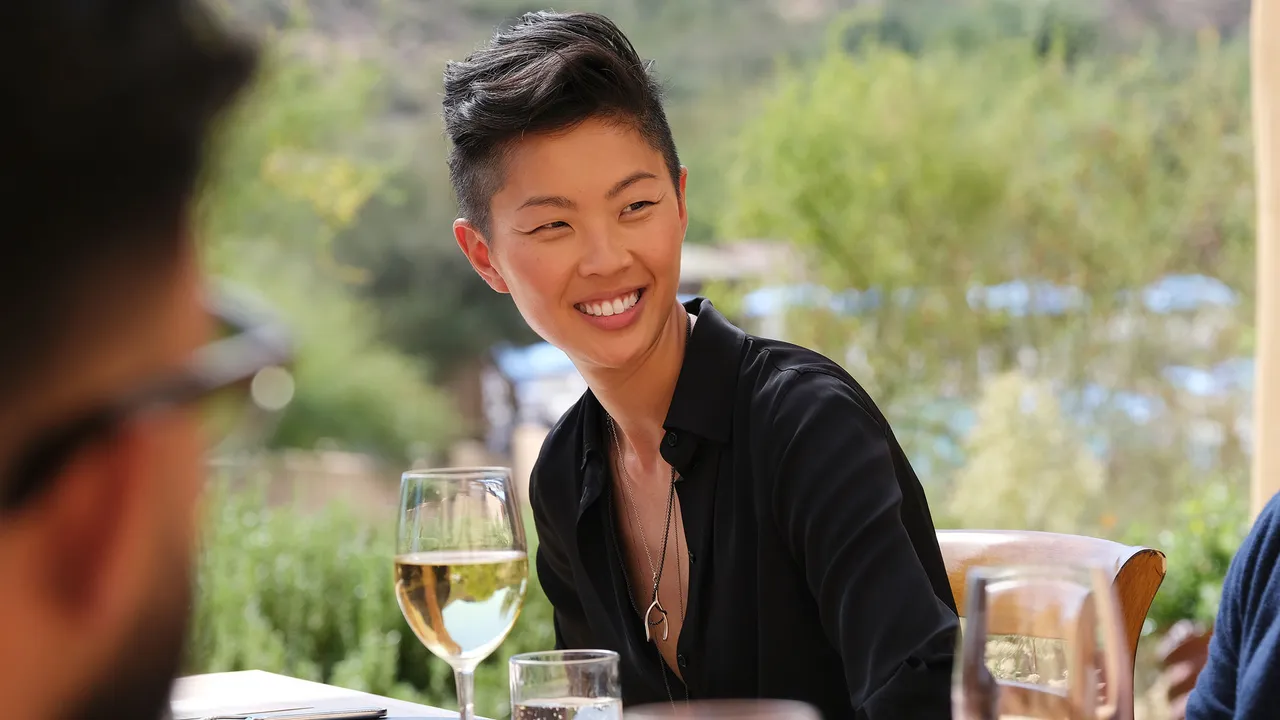 We caught up with the Top Chef legend about the pressures of cooking on television, getting gay married, and her love of chicken fingers.

In her culinary philosophy, Kristen Kish strives to combine flavor profiles and techniques that feel “authentic” to her, especially if they fall outside of strict tradition. She’s carried that streak of fearlessness throughout her journey from winning Top Chef season 10 to opening her restaurant Arlo Grey to becoming a lesbian power suit icon as a host on programs like Iron Chef: Quest for an Iron Legend.

Born in Seoul, Korea and raised by adoptive parents in Michigan, the 39-year-old chef imparts her singular point-of-view by conjuring together unexpected flavors and textures. She pulls from her various heritages: the Midwest comfort food she grew up with, her French culinary training, and her growing connection to her Korean identity. “I think about some of the things I made five years ago, and I’m like, ‘Why did you do that?’,” she tells Them. “But at that moment, that was the story I wanted to tell. I’m sure it will evolve in the next five, 10, 15 years. I’m allowed to have fun with it and play with it.”

So when Kish was approached to collaborate with Yobo, a craft soju brand whose founder Carolyn Kim also strives to capture the Korean American experience, she knew that she had to put her own twist on the distilled liquor. Instead of replicating the “jarring and harsh” beverage that might be downed by the green bottle at Korean barbecue restaurants, she approached the line with the same “nuance that maybe a chef would think about food,” Kish says. So she conceptualized the four soju-based aperitifs by drawing from her most cherished memories and scents: the herbal tea her wife drinks religiously, the sour cherries that remind her of Michigan summers, and the refreshing bitterness of kumquat. To a cocktail lover, the resulting beverages offer similarly familiar feelings, but with curiosity-sparking twists.

“Experiment and don’t be scared,” Kish urges those who might not be familiar with soju, offering sage advice that could be as useful in everyday life as it is in the kitchen. “Just as I’ve defined what it means to me in this space, once those bottles hit your hands, [the question is], ’How do you want to use it?’ You’re allowed to use it in any which way that you enjoy.”

Below, Them chatted with the Austin-based chef about the pressures of cooking on television, getting gay married, and her love of chicken fingers.

Out of the different flavors in your line, the Seoul one caught my attention, because it’s inspired by your wife’s favorite tea, but it’s also dedicated to your birthplace. How did those two things come together for you?

It’s like picking a favorite child, but if I did have a favorite, perhaps it is this one. Every single night, for the most part, my wife makes this hibiscus, lemon balm tea with raw honey, and she does it for all the health purposes. She’s into fueling her body with things that are beneficial as opposed to me, where I’m just like, “I like fried chicken.” Apparently, it helps with anxiety levels and calms your nervous system. After drinking this over and over again, she finally got me to taste it, and I was like, “Huh, this is actually quite good.” It just all kind of made sense, and the color reminded me of Campari. Not the taste, but why not use this in the same way you would something that’s familiar, like Campari?

Why those four flavor profiles all made sense to me is you can directly correlate them to something that is somewhat familiar. Earth, which is umami and smoked mushroom, is one where maybe you’re like, “Wait a second.” But I don’t know anyone who is a cocktail person that hasn’t had an old-fashioned. It [also] has this depth and caramel notes, a slight smokiness.

How has going back to Korea influenced your cooking?

If you ever come to my restaurant or any event where I’m preparing food, I don’t know that you’re going to pull out Korean notes. I have so much comfort Midwest storytelling in my bones that that kind of takes the majority of it. More importantly for me, [going back to Korea] was about feeling worthy of owning my Korean American heritage. For a long time there was a lot of disconnect because I was like, “Am I allowed to have that? Am I allowed to claim this as my own?” And the answer is, absolutely. It’s just a different definition of what my Korean Americanness means to me. If I want to cook Korean food and own it, I impart my other points of my life and inspiration and make it completely different. I am [no longer] scared to step in that place and use it as a jumping-off point to influence the way I cook.

What are the most nostalgic comfort meals that you can remember growing up as a kid in Michigan?

Meatloaf and green bean casserole. A lot of down and dirty, half-store-bought, half-homemade kind of stuff. That and I’m a connoisseur of chicken fingers — the shittier the better. Arby’s chicken fingers and curly fries, I highly recommend.

After being in competition shows and also hosting them, what advice would you give to chefs or home cooks who are working with constraints — whether that’s time, ingredients, tools, or something else?

There’s a lot of people who say, if you go on competition shows, stick to what you know. And then there’s people that go in there and use it as this experimental [space] to figure it out. There’s not one way to go about it. I think if cooking what you know bores you, and you’re not able to push yourself into a space where you can excel, then maybe you should step outside that comfort zone. However, if you do step outside your comfort zone and that gives you anxiety, maybe step back into your comfort zone.

Cooking at home and cooking on television are two very different things, even for professional chefs. I don’t know if I’ll ever be able to cook like I did on Top Chef with that nth gear of speed. I don’t know what it was. I’m not going to have it unless I do that again, because it comes out of nowhere.

Right, because after being eliminated, you were on Last Chance Kitchen, where you were fighting for your life. So I’m sure that specific pressure also pushed you in ways that may have surprised you.

Sometimes I try to place myself back in that moment in time. I was feeling all the things, and I also can’t pinpoint exactly what I was feeling. I remember before we stepped on camera every single day, I felt like I was going to throw up everywhere, and my hands would shake. Then I remember what it would feel like when I would win. It’s this sense of validation. When I got kicked off, it was a mix of relief, but also like, “Oh no, I’m going to get my way back in there.” It was kind of all a blur, to be honest. It all happened very, very fast. But I will say, I was the calmest cooking in the finale because I was like, “Well, I’ve made it here, whatever happens is going to happen.”

A year after you won Top Chef, you posted a picture with your partner at the time, which was framed as a “coming out.” Was that a conscious decision for you?

It was a conscious decision, but I also wasn’t really thinking about it. I was like, “Oh, I’m just going to post this picture on Instagram.” [At that time,] I didn’t really think people cared. I had like 15,000 followers or something. But I just posted like anyone else would. Then apparently, people cared, which I found really surprising. Then I was out and just living my life.

But yes, I’m now married. Marriage was this thing that I didn’t ever think I wanted. I was like, “Fuck the institution of marriage, how dare they say I can’t get married, I don’t want to play into this bullshit.” That kind of thing. I was very angry. Then I was like, “Wait, why am I being so angry? If I want to get married, and I’m allowed to get married and have the love that I want, why not do that?” I don’t have to [refuse] it out of spite. Obviously, that was a discussion, and we decided that getting married was the thing that felt the most right.

What are some of your goals outside of food?

For much of my life, I tried to curate what I thought was the “perfect life,” whether that be a certain job or car or house — these materialistic things that the public views as success. Then I realized, obviously, that does not work. [When I was younger,] it caused me a great deal of anxiety and pushed me into this depression that I had to find my way out of. Now what I realize is the more I am who I am — and that’s allowed to change from day to day, year to year — I just like the things I find important to me, that’s really it.

Last question. What is the last meal you would eat before you die?